13A: SL never got what India has Four decades of constitutional folly and failure – 2

By C. A. Chandraprema
(Courtesy of The Island)

President J. R. Jayewardene and Indian Prime Minister Rajiv Gandhi after signing the Indo-Lanka Accord, which paved the way for the provincial council system.

“Upon the making of a proclamation under the Public Security Ordinance or the law for the time being in force relating to public security, bringing the provisions of such Ordinance or law into operation on the ground that the maintenance of essential supplies and services is, threatened or that the security of Sri Lanka is threatened by war or external aggression or armed rebellion, the President may give directions to any Governor as to the manner in which the executive power exercisable by the Governor is to be exercised …”

It is noteworthy that when the 1978 Constitution was first enacted, under the original Article 155, if a state of emergency had been in operation for a period of ninety consecutive days or a period of ninety days in total during six consecutive months, no declaration of a state of emergency made during the ensuing six months could be maintained for more than ten days unless such Proclamation was approved by Parliament by a two-thirds majority of the whole number of Members of Parliament. It should be noted that this was not just two thirds of the number of MPs who may be present on that day in Parliament, but two thirds of the whole number of MPs in Parliament – a requirement which substantially ups the ante.

In the context of the late 1970s, this provision may have been a knee-jerk reaction to the emergency rule that took place under the Sirima Bandaranaike government. However as the northern terrorist threat grew, wiser counsel prevailed and the Constitution was amended accordingly. Of all the housekeeping Constitutional Amendments, the most useful and important one was arguably the Tenth Amendment, which removed the requirement for a two thirds majority of the whole number of MPs in Parliament to maintain a state of emergency beyond a certain period.

Look-alikes that are not alike

The Thirteenth Amendment was not something that grew out of our soil but was imposed on Sri Lanka by India, which thought it was a suitable compromise solution to the demand for a separate state. The Indian central government at that time saw itself as the champion of Tamil rights in Sri Lanka. So it imposed on Sri Lanka what was supposed to be a replica of the system of devolution that was in practice in India in a ‘one size fits all’ kind of solution. The J. R. Jayewardene government was forced to accept what the Indians imposed on Sri Lanka under threat of a fully-fledged invasion of this country. In the late 1980s, the situation was such that the Indians would have followed through with such a threat. They had at that time not yet tasted the bitter fruit that was to result from this intervention. Hence this particular Constitutional Amendment is the one exception where the folly cannot be blamed on a Sri Lankan government or Sri Lankan political parties. The system of devolution that was imposed on Sri Lanka by the Indians superficially looks like the system in operation in India.

There is even a provision in the 13th Amendment incorporated into the Constitution as Article 154L for ‘President’s rule’ like in India. Even the wording of this provision in the 13th Amendment is very similar to Article 356 of the Indian Constitution. If the President, on receipt of a report from the Governor of the Province or otherwise, is satisfied that a situation has arisen in which the administration of the Province cannot be carried on in accordance with the provisions of the Constitution, the President may by Proclamation- (a) assume to himself all or any of the functions of the administration of the Province and all or any of the powers vested in, or exercisable by, the Governor. (b) declare that the powers of the Provincial Council shall be exercisable by, or under the authority of, Parliament.

Article 353 of the Indian Constitution has a provision which states that while a Proclamation of Emergency is in operation, the executive power of the Union shall extend to the giving of directions to any State as to the manner in which the executive power thereof is to be exercised. A similar provision can be seen in the Thirteenth Amendment which has been incorporated into the Sri Lankan

Constitution as Article 154J which goes as follows: “Upon the making of a proclamation under the Public Security Ordinance or the law for the time being in force relating to public security, bringing the provisions of such Ordinance or law into operation on the ground that the maintenance of essential supplies and services is, threatened or that the security of Sri Lanka is threatened by war or external aggression or armed rebellion, the President may give directions to any Governor as to the manner in which the executive power exercisable by the Governor is to be exercised …”

Despite the superficial similarity of the systems of devolution in practice in Sri Lanka and India, Sri Lanka has been deprived of all the most important safeguards that the central government in India has vis-a-vis the states. The shortchanging starts with the safeguard that has grudgingly been given to the Sri Lankan center vis-a-vis the provinces. In Sri Lanka, President’s rule can last only for a maximum of one year whereas in India, President’s rule can last for up to three years. The important safeguards that are available to the Indian centre but unavailable to the Sri Lankan center are as follows:

Safeguards available to the Indian Centre

Some Indian states are much bigger than most nation states in the world and many are far bigger than Sri Lanka both in terms of population and land mass. Yet the Indian President has the power to veto Bills coming from such large sub-national entities. In Sri Lanka however, when a Provincial Governor reserves a statute for reference to the President, all that the Sri Lankan President is empowered to do is to refer it to the Supreme Court for a determination that it is not inconsistent with the provisions of the Constitution. If the Supreme Court determines that the statute is consistent with the provisions of the Constitution, the Governor on receipt of the Court’s determination is mandatorily required to assent to the statute. Thus, we see that when it comes to assenting or not assenting to provincial statutes, the Sri Lankan President is, at best, only a post box.

Article 249 of the Indian Constitution: If the Indian upper house of Parliament the Rajya Sabha has declared by resolution supported by not less than two-thirds of the members present and voting that it is necessary or expedient in the national interest that Parliament should make laws with respect to any matter enumerated in the State List specified in the resolution, it shall be lawful for Parliament to make laws for the whole or any part of the territory of India with respect to that matter while the resolution remains in force. Such a resolution shall remain in force for a period not exceeding one year. It can continue to be in force for as many years as is necessary provided the Rajya Sabha keeps renewing the resolution annually. It should be noted that this resolution needs to be passed only in the upper house and not in the Lok Sabha. The 245 member Rajya Sabha is made up of representatives of the Indian states with the number of representatives depending on the size and population of the state.

It should be noted that the majority required to pass such a resolution is only two thirds of the Members present on that day and not two thirds of the whole number of Members of the Rajya sabha. This provision gives the representatives of other states of the Indian union sweeping powers to resolutely intervene to bring a separatist state under control. The Rajya Sabha has the power to apply this provision to a part of India or even the entire country if necessary and there is no limit to the number of years it can be in operation provided the resolution is renewed annually. Article 250 of the Indian Constitution: Parliament has the power to legislate with respect to any matter in the State List whenever a state of emergency is in operation. This power may extend to the whole of India or to just one state according to requirement. Article 251 of the Indian Constitution stipulates that whenever the Indian Parliament makes laws relating to subjects coming under the states in terms of Articles 249 and 250, the law made by Parliament so long as it is in force, will override any law on the same matter made by the state legislatures. In Sri Lanka, if Parliament is to legislate on a matter coming under the purview of the PCs without the consent of each and every provincial council, it will have to be passed by a two-thirds majority in Parliament. In Sri Lanka this requirement does not change even when an emergency is in operation.

There is no gainsaying the fact that Articles 201, 249, 250, 251 and 354 of the Indian Constitution make a world of a difference. If the Sri Lankan President was able to veto any statute passed by the Provincial Councils, if all the Provincial Council Members in Sri Lanka sitting as a formal body (in lieu of a Rajya Sabha) was able to with a two-thirds majority authorise the Parliament to take over all the functions of a provincial council in the national interest and continue for an indefinite period, if the declaration of a state of emergency automatically vested Parliament with the power to make laws with regard to any subject coming under the provincial councils by a simple majority, and the powers of taxation of the provincial councils can be automatically taken over by the center whenever a state of emergency is in operation, the whole game would be different. The attitude of the people towards the devolution of power itself would be different.

What we have now is a situation where Sri Lanka is expected to implement the devolution part of the Indian system including having separate police forces for each province, but without any of the above mentioned safeguards. During the last years of the Congress Party government, the full implementation of the 13th Amendment was a constant demand made on Sri Lanka. That demand should have been accompanied by an invitation to adopt Articles 201, 249, 250, 251 and 354 of the Indian Constitution as well. If a country like India needs such safeguards, how is anybody to argue that Sri Lanka can do without them? The above mentioned Articles of the Indian Constitution are just key examples of what is lacking in Sri Lanka’s 13th Amendment. There is much more. In the previous article, we have pointed out how lacking the Sri Lankan Sixth Amendment is when compared to the Indian 16th Amendment. All these things finally add up to a massive Constitutional failure in SL. 190 Viewers

Previous: Powers of President under 19A
Next: Playing ducks and drakes with electoral system Four decades of constitutional folly and failure – 3 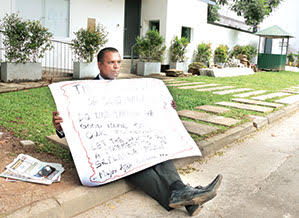 Major (retd.) Ajith Prasanna commenced a fast outside the Swiss Embassy on Monday, Dec 02, demanding that the Sri Lanka police be allowed to record a statement from a local employee, allegedly abducted and released by a group of unidentified persons on Nov 25. 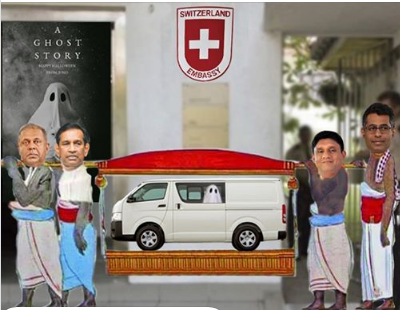 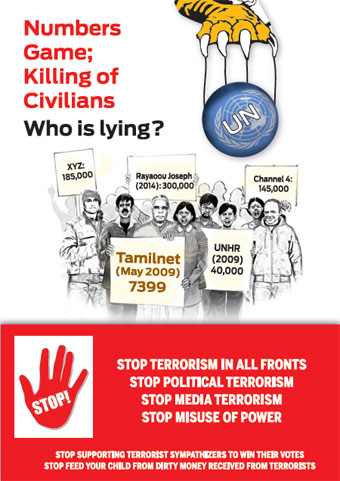 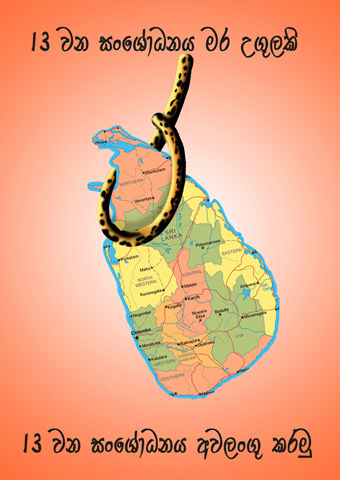