When the author is an attendee of UNSC Resolution 1373 proscribed LTTE front TGTE’s 9thsitting of a ‘utopian Parliament’ in Boston, USA from 18-20 May, 2018there is little that needs to be said about her anti-Sri Lankan article. However, let us address her harangue.

Author claims LTTE was decisively defeated at the cost of ‘tens of thousands of civilians’ can you please establish how many instead of producing vague sentences.

Author claims ‘credible allegations” – how about providing the sources.

Since the West ‘celebrated in 2015’ the ouster of Rajapakse, can author explain how many chickens they counted from 2015 to 2020 delivering your so-called ‘justice’?

Has the author ever thought that if there is no case – no one can create a case except of course the LTTE bandwagon infamous for their lies and fake propaganda.

A correction, the island is under democratic rule having gone for elections & the people giving a massive mandate to the President. No western leader can ever aspire to even come close to getting the people’s vote as Sri Lankan voters have given.

Maybe author needs to look up the role of the defense secretary and the role of the military because the former defense secretary & present President did not ‘preside over the last phase of the war’ and correcting author again as it was a terrorist conflict and not a civil war. Again author is making insinuations because the current Prime Minister, the former President won his electorate with a thumping majority given directly by the People.

For a person holding a doctorate, the author is really exposing yourself because there is no such thing as a ‘brother’s party’ except the Sri Lankan Podujana Peramuna which won with the People’s vote. Is there any problem the author has with that?

The author seems to be having a problem with the ‘return of the Rajapakse’s – did they do anything to the author personally, for her to hold such a grudge?

Isn’t it hilarious how according to Samantha Power, Sri Lanka the ‘global champion of human rights & democratic accountability’ —– arrests people, dumps them in prison, does not charge them and denies bail and then does nothing after 97 foreign intel warnings that results in close to 300 innocent lives getting murdered on Easter Sunday?

How about spending some valuable time broaching on the hiccups of 2015-2020 rule and the illegalities during this period. The author calls our Prevention of Terrorism Act ‘draconian’ how about some articles on the US Patriot Act and the manner of whisking people to undisclosed torture centres – Guantanamo Bay & Abu Gharib prisons?

Isn’t it interesting how when a US puppet is placed in power the international community has all the ability to give them needed ‘time and space’ but when anyone they don’t like is in power, verbal and worded wars are declared and out comes these ‘war crimes’ stories. We are so amused. We can even predict what the next course of actions are! The West’s version of how democracy works is fascinating. Don’t be too anti-Rajapakse, lest people support them to power. This is really hilarious.

When countries who illegally bomb nations to the cave days, when countries drop atomic bombs, when countries use chemical weapons, when countries fund regime change, when countries fund election overthrows and nothing gets done about them inspite of more than credible evidence, Kate Cronin-Furman what are you talking about. These are the countries that claim to be angels of good governance and rule of law. A man died shouting he couldn’t breath and resulted in massive protests across that country, don’t these cases constitute ‘impunity’?

It’s great that the author brought up the ‘white van abductions’ can she please tell us how many disappeared, when & how, how many returned to the doorsteps of embassies & went missing overseas? We are dying to know these numbers and details ourselves. It’s a pity the author didn’t cover the 1980s period where the real white vans whisked off people never to return. How about covering that period for a change!

As for mention of civil society – can the author please provide how many of these civil society organizations are funded by foreign governments and loyal to these paymasters?

The author’s reference to ‘prohibitions memorializing those lost in the war’ warrants a bit of clarification. Is the author implying LTTE dead? Does the author want to commemorate terrorists? Because only LTTE dead are denied being eulogized and it would be no different to US denying Osama bin Laden to have annual memorial day celebrations.

There is nothing to get excited about Sri Lanka withdrawing from the bogus resolutions passed in UNHRC where a personal report to the UNSG which was not tabled in the UNGA or UNSC and not even in the UNHRC is suddenly used as basis for UNHRC heads witch hunt against Sri Lanka. This former head in fact is giving statements contrary & opposite to what she said in her official capacity. This arrests all doubts of conflict of interest by her. She now says close to 146,000 Tamils lost their lives during the last 6 decades” – from where is she plucking her figures!

It’s also good that the author made reference to the release of a soldier because it is all circumstantial evidence politicized for no reason. Please take out the case evidence and testimonies. There is a major difference in facts and conjecture.

It would really be great if the author can put her expertise to better use by helping us solve the puzzle of finding answers to some questions.

How about her next article providing these answers! 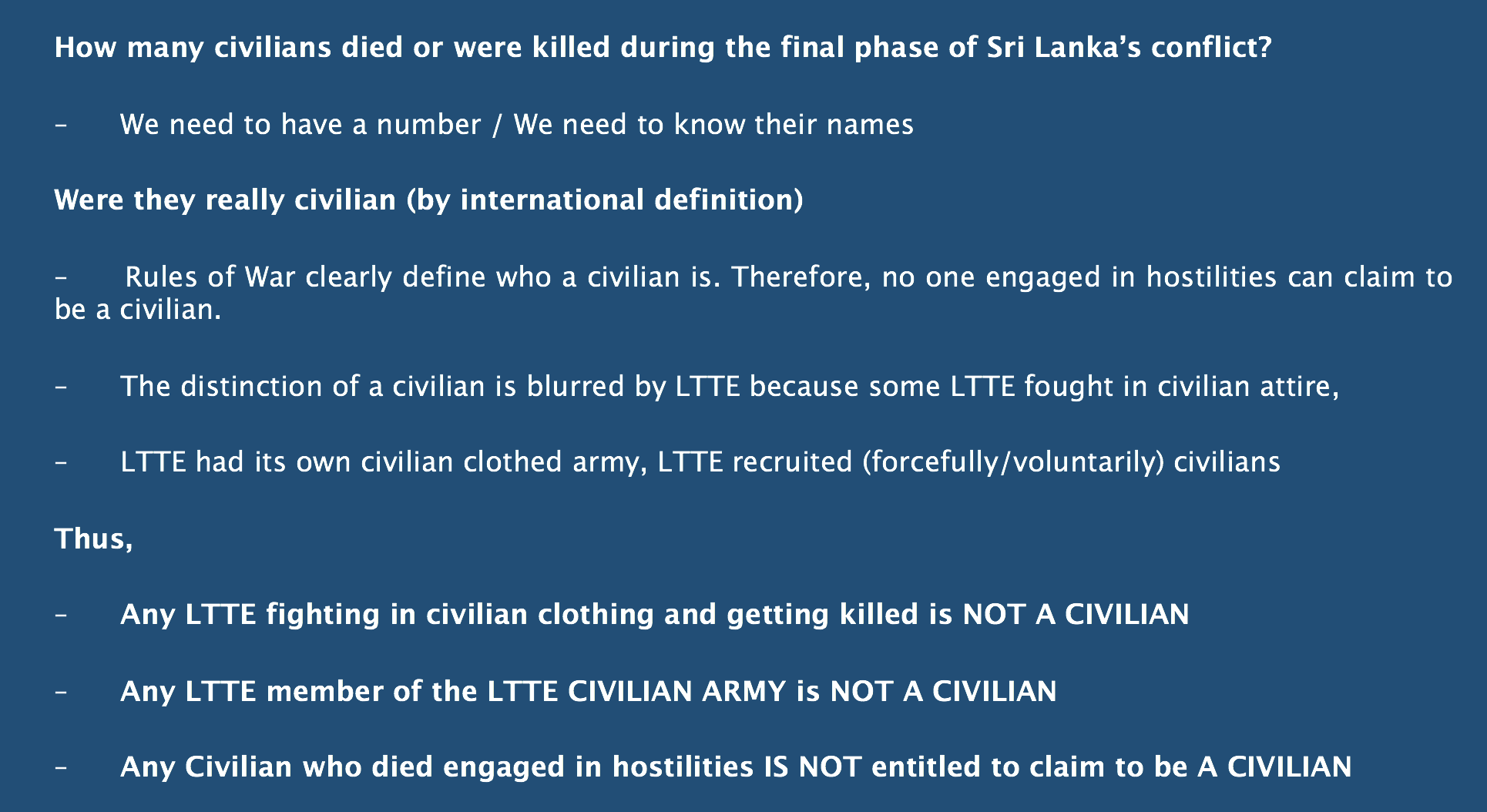 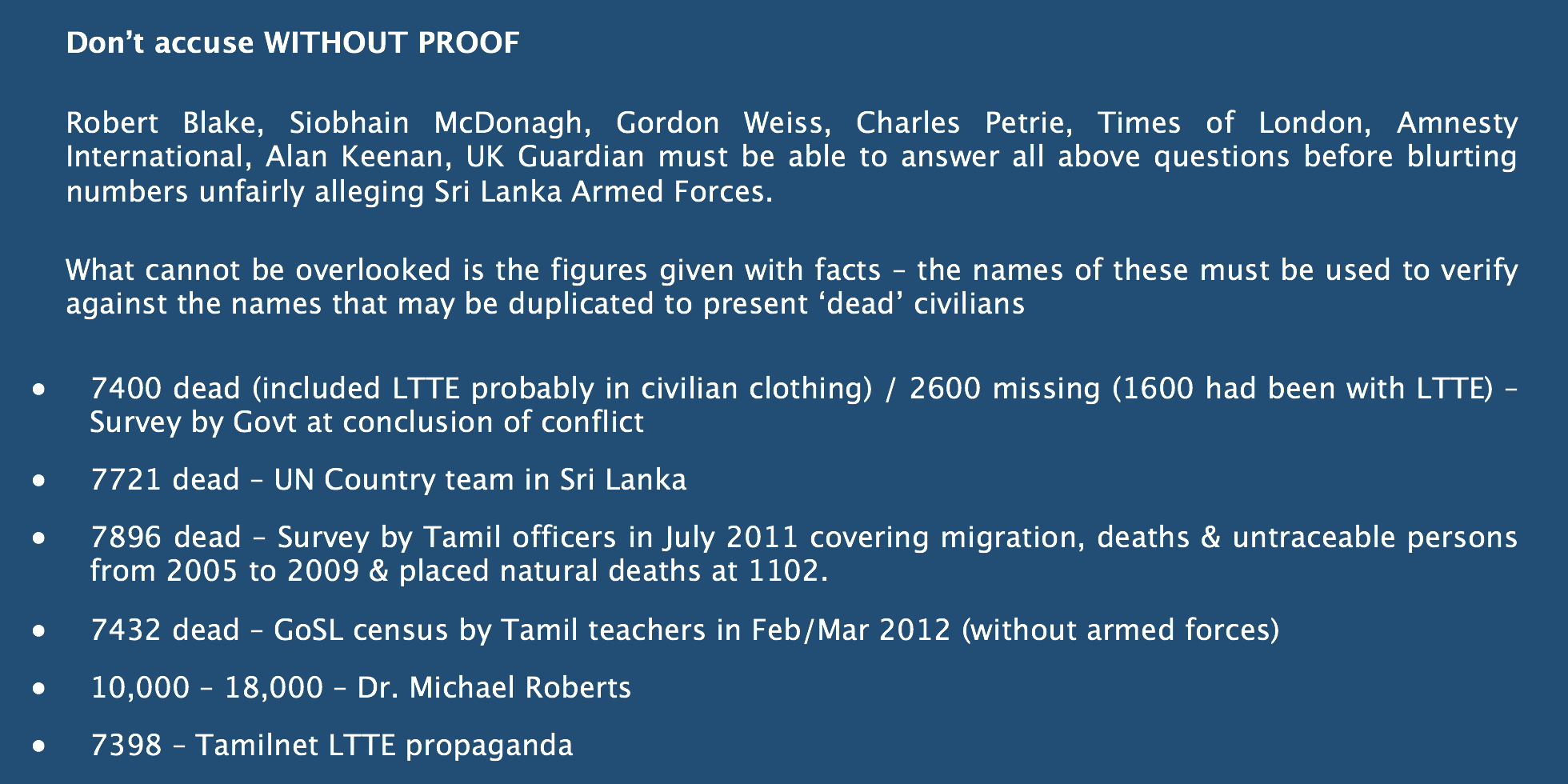 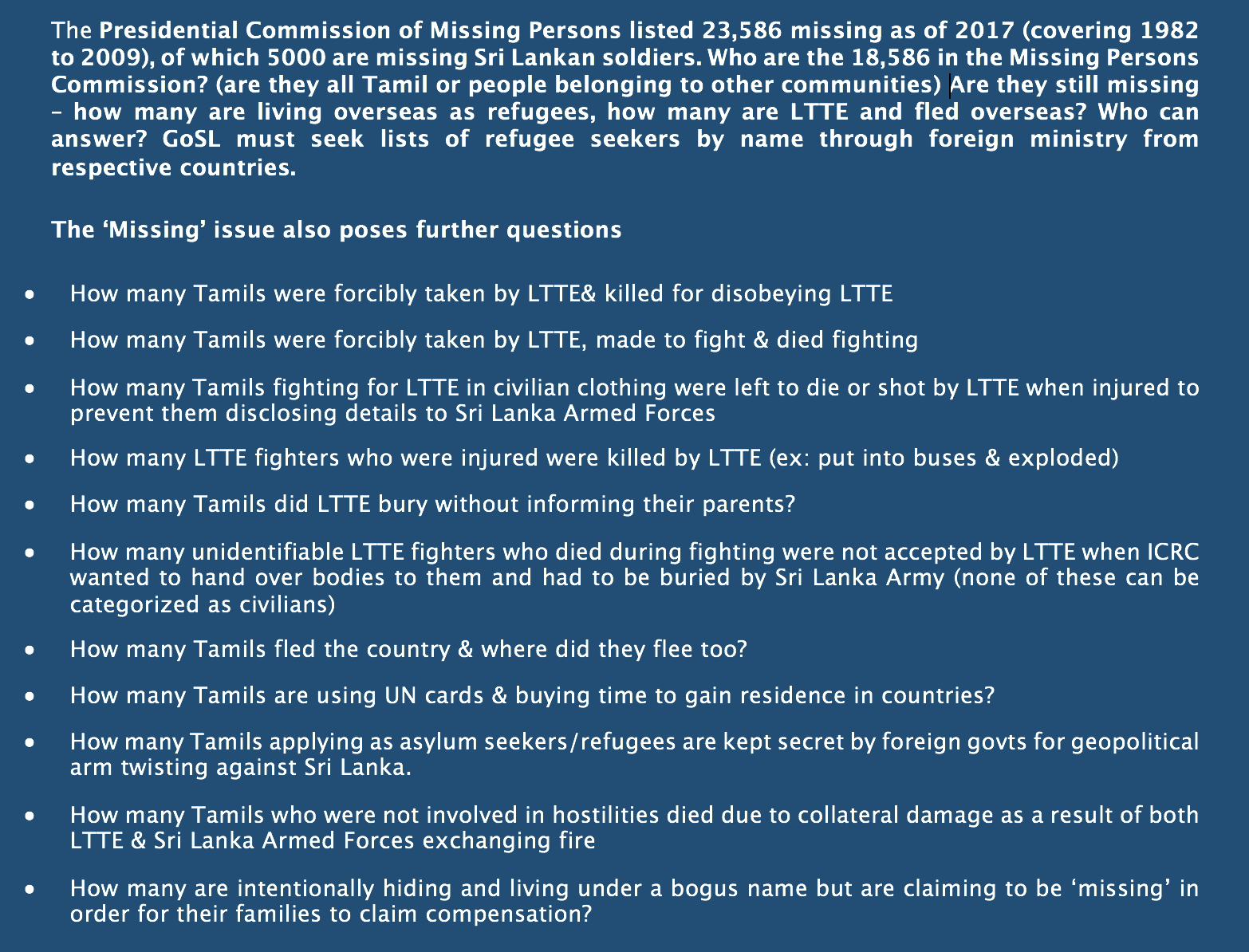 Since 2009, the international pundits in the UN and UNHRC without answering these fundamental and basic questions are allowing the usage of the term ‘genocide’ unfairly against a National Army, who was only doing their duty in protecting the Nation and its People from an armed non-state actor indulging in terror.

Until such time those making allegations can prove by name and number as well as evidence that Sri Lanka Armed Forces purposely and with intent killed civilians, no charges against the Sri Lankan Armed Forces should be entertained and the GoSL must make this very clear to the foreign governments.

Previous: Sri Lanka’s Judiciary must be biased & safeguard Sri Lanka’s Sovereignty & Protect the Rights of Citizens
Next: The Provincial Council Election must not be held – Sinhaladeepa Jathika Peramuna