UNHRC is a toothless tiger – will Sri Lanka play its cards right in Geneva? 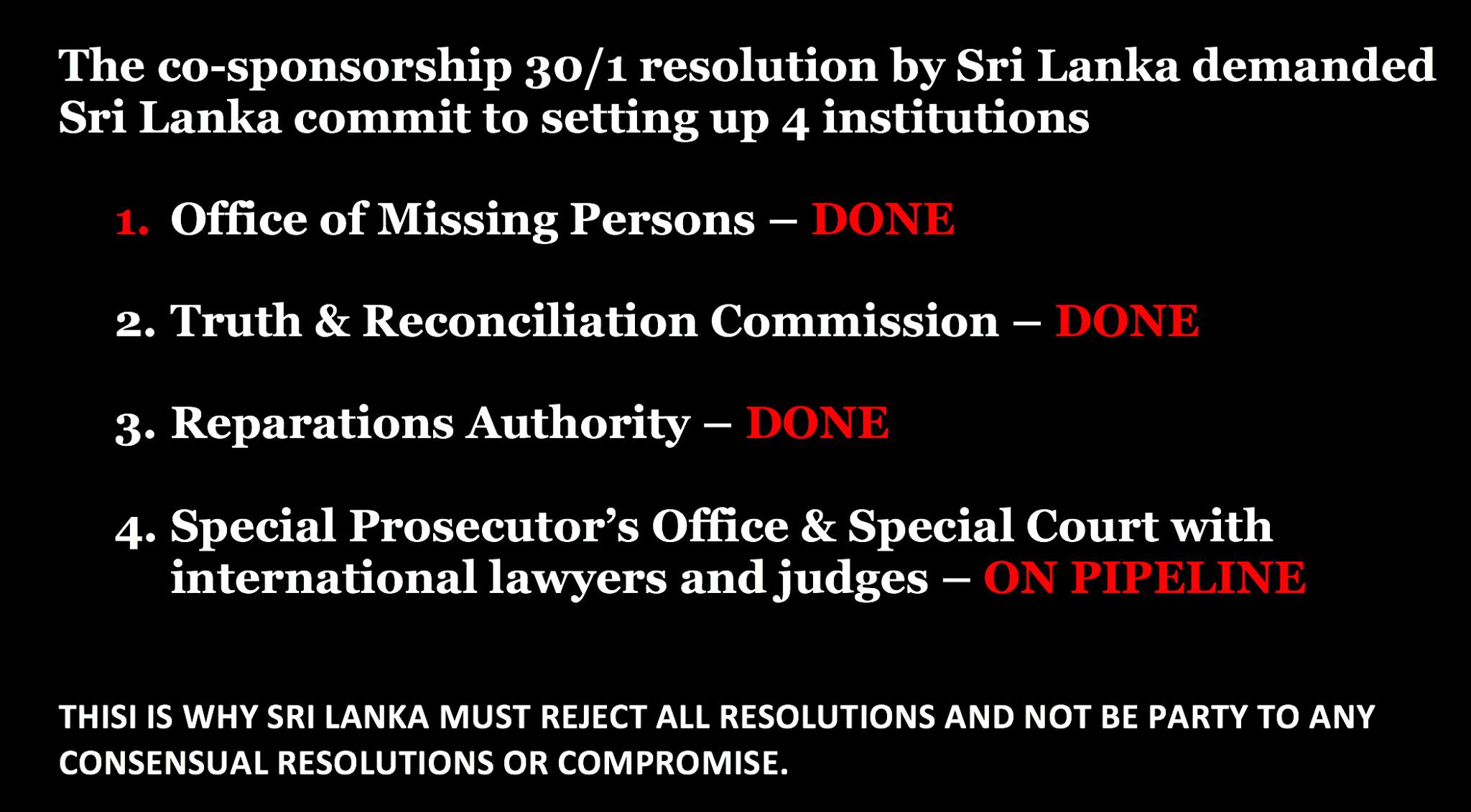 UNHRC Resolutions are legally non-binding. Its mandate covers only human rights not international humanitarian laws. Whether all 47 members vote against Sri Lanka, or whether all 47 Members vote for Sri Lanka, UNHRC cannot force Sri Lanka to do anything. Its only an annual circus for political pressures via resolutions. When UNHRC Resolutions are legally non-binding it implies that he Main Sponsors/Core Group can demand the Sun or the Moon from Sri Lanka, but Sri Lanka is bound in no way to accommodate their demands. However, if Sri Lanka goes and does something stupid like co-sponsoring a resolution inimical to Sri Lanka or accepts a consensual resolution, then we are more or less agreeing to comply with the provisions demanded by the Core Group/Main Sponsors. This was what happened with the co-sponsorship by Sri Lanka in 2015 which led to the OMP, Reparations to Tigers, Truth & Reconciliation Commission and all that was left to do was to create a Special Prosecutors office/Special Court with international lawyers & judges. The 2021 UNHRC Resolution is aiming to put the lid of Sri Lanka’s coffin with this last objective.

If UNHRC Resolutions are legally non-binding – do we need to go begging to India promising them this port terminal or that port terminal or whatever shopping-list India demands from Sri Lanka? – NO

If UNHRC Resolutions are legally non-binding – should Sri Lanka go & co-sponsor the Resolution? – NO

If UNHRC Resolutions are legally non-binding – should Sri Lanka agree to a consensual resolution? – NO

Note: why are the Main Sponsors leaking their draft resolutions? This ploy was used when the Ban Ki Moon personally commissioned report was leaked as was the Petrie Report.

Is it to provoke the weak officials representing Sri Lanka to follow the usual appeasement line and agree to something, simply to dilute the resolution, so they can return home claiming to have ‘fought’ and surrendered!

What should be very clear is that Sri Lanka should not go for a co-sponsorship or a consensual resolution.

By agreeing to either Sri Lanka is voluntarily committing itself to what the Main Sponsors want. This is the worst hara kiri or treachery any officials can commit against a sovereign state & the armed forces that eliminated terror.

Instead of witch-hunting Sri Lanka for ending terror, the Main Sponsors must look at how LTTE fronts are swindling their citizens operating from foreign shores. The GoSL and Foreign Ministry must demand action on LTTE’s illegal financial network that swindles foreign citizens and pockets swindled money into the accounts of foreign politicians and international heads who are the one’s parroting pro-LTTE statements. Investigate them all. GoSL must go on the offensive. Compile a list of all foreign MPs and request they be investigated for links to LTTE & the international illegal monetary network. The only claim of war crimes is based on the allegation of 40,000 dead, the GoSL/Foreign Ministry must go on the offensive using this too by demanding they present names of the supposed dead! There are plenty of ways Sri Lanka can turn the bogus allegations to Sri Lanka’s advantage, why are we not using them?

Previous: Sri Lanka Armed Forces are CRUEL INHUMAN War Criminals – Look how they treated injured LTTE
Next: Lanka, at Geneva, sponsored by UK “The Mother of all things evil” in the colonial world. UK The pot calling the kettle black?.