Sri Lanka is an island nation which makes its ports and airports – the entry & exit points to the Nation strategically important and necessitates elected governments to place this significance above all else. The importance of Colombo Port is both strategic and commercial, this further strengthens the need for any government to weigh the risks and odds when sourcing for foreign investors. Colombo Port is ranked 23rdglobally and located in one of the world’s best routes for shipping. What Sri Lanka’s leaders need to ponder is whether India & Japan are entering as investors to make Colombo Port commercially successful or to use Port as a political watch post? 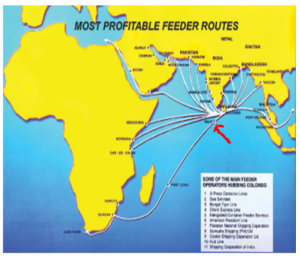 Sri Lanka must come to terms with the scope and scale of foreign interference & interventions in Sri Lanka. These have been involved & associated with political parties, politicians, rebel movements (JVP), terror movements (LTTE), media outlets, social organizations and we see an increase in faith-based organizations.

We also witnessed their ability to even fund and influence local elections & set about regime change. This was part of the US Pivot to Asia, the QUAD strategy with India now a key partner in the Indo-US Pacific Strategy. Thus, the theatre of geopolitics has changed with India being part of Western geopolitical strategy in Asia. A key component of this strategy uses India to forge a bloc of Asian nations to contain and challenge China’s rise. The MCC-ACSA-SOFA triangular package to Sri Lanka was part of US & its allies gameplan. The frequent naval training programs, calling to Port of US & Indian ships to Trinco showcases the development of this objective. It is natural therefore, to wonder if the overall plan is to turn Colombo Port into a base for the two QUAD partners (India & Japan) under the camouflage of developing it.

We must also note that the Indian presence may primarily be to function as a ‘watching post’ for the Chinese built Colombo Port City.

Yes, Colombo Port must take advantage of its strategic positioning

Yes, Colombo Port must market itself as best option for shipping lines

But, what ails all these noble objectives is funding but worse is the political tug-of-war that comes to play partnered by corruptions putting national interests at risk. 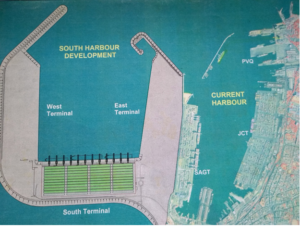 If Sri Lanka’s political leaders realized the importance of Sri Lanka’s strategic positioning, they would have first developed its ports to generate revenue for Sri Lanka’s other developments as these revenues come from foreign currency.

The country has always lacked proper national planning coupled with savvy economic options instead of simply resorting to carrying a begging bowl for loans and accumulating the loan by simply paying the interest.

This argument is presently being used to psychologically mesmerize the general public into accepting the new deal as not taking a loan but attracting foreign investment.

A loan is paid back but a FDI means the parties making investments are not doing any charity. They expect returns and they will remain in Sri Lanka until they get their returns.

If India and Japan are making investments in the ECT – how much are they putting, what is the investment for, what do their investment not cover, how much cost will Sri Lanka have to bear, against the revenues how much will go to India & Japan and what is the eventual profit left for Sri Lanka? Is it worth in the end?

Will this mean India & Japan who are putting an investment in Sri Lanka’s main Port be occupying the Port for some 40 or more years?This is a period that we may all not live to even see India & Japan leaving after feeling satisfied they have got their investment back!

Sri Lanka must remember, India & Japan as investors are not going to be putting any small amount. If there are kickbacks involved to palm the hands of many Sri Lankans, they will also want to recover this amount and will remain in Sri Lanka until they do so. 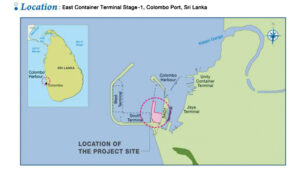 So ECT is nothing but another Hambantota Port– which was given for 99 year written lease. For both deals – the land ownership remains with Sri Lanka.

But what is the viability for Sri Lanka commercially? We are all unsure about the provisions in the ECT MOC agreement because what is disclosed is never what ends up being signed!

Will Sri Lanka’s ECT terminal really be commercially viable simply with 51% of profits for the next 40 to 50 years? This is the question that everyone must think of and provide answers.

Have other factors also been taken into account. We are told of a Terminal Operating Company, with India handling the operations. Does this mean, India will bring Indian labor. Will manipulative Sri Lankan advisors put forward the argument that Sri Lanka’s Trade Unions can be silenced by bringing Indians as alternate option. What if Indian workers refuse to work too and Indian Port Operator refuses to solve the problem? What will Sri Lanka do or be able to do in such a scenario?

We cannot forget how India closed all of its borders to Nepal denying food, medicines and energy supply simply because Nepal refused to include what India wanted into Nepal’s new constitution.

We cannot also forget the infamous parippu drop in 1987 or the manner India whisked Prabakaran to India in a helicopter & threatened to strike Sri Lanka if Sri Lanka’s Armed Forces tried to stop India. The Indo-Lanka Accord was virtually signed under duress. There are enough of examples we can provide as to showcase how India has been historically a bully of Sri Lanka far more than even the US.

So when India wishes to be an investor in Sri Lanka’s main port, no one can blame Sri Lankans for being apprehensive. 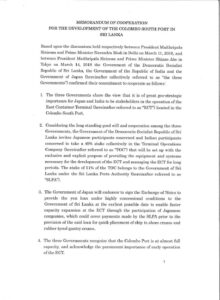 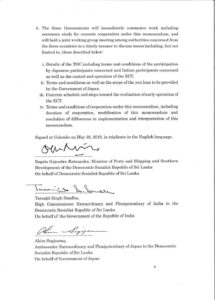 The people’s apprehensions are further highlighted by the manner Adani Group has steamrolled itself to become the selected party without any tender process. The Adani name was never featured when the MoC was signed by Yahapalana in May 2019. What makes people cautious about Adani Group is its corruption and mismanagement charges in both Australia & India with even Indian farmers publicly protesting against Adani. Australia even has a “Stop Adani Movement’. Therefore, the Sri Lankan public has every right to make public their concerns to the Government and the Government must not ignore these valid points. 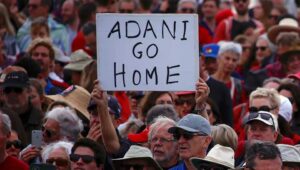 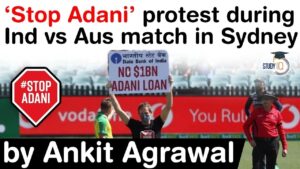 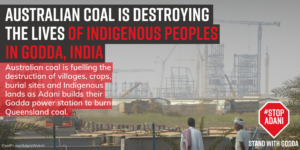 Under the Yahapalana MoC, India was to construct the ECT and Japan was to provide a $500m loan through 40 years. So what is Japan’s role in the 2020 MoC loan giver or investor – apparently Japan is now an investor.

So if both India & Japan are investors, how will the equipment be bought, will this be set off against the initial investment – how much is it likely to be? Have all these areas been discussed and finalized?

Whether loan or investment, India & Japan will be in Colombo Port for 40 or more years!

The contradictory statements by Sri Lanka’s Government, politicians and even Port officials makes matters worse. In the eyes of the People, Sri Lanka’s politicians have been gifting Sri Lanka’s national assets and resources as if they were their personal property and they do not wish to have the remaining resources and assets siphoned off.

This is one reason why there are calls to have local investors assist to develop Colombo Port. While Colombo Port’s South Terminal is handled by China with only 15% stake for SLPA, the SAGT is also with a conglomerate of foreign companies using JKH as its local front. The ECT regarded as one of Sri Lanka’s most important terminals if in Indian hands spells serious future scenarios for Sri Lanka.

Who will market Colombo Port?

If all warnings are ignored & India is given ECT with provision to operate the port what if Adani does not market Colombo Port ECT – it’s like spending millions to build a hotel and waiting for tourists to arrive without marketing the hotel!

Both operations and marketing must go hand in hand.

For lack of proper marketing Colombo Port is suffering and no amount of money spent for developing the port will be worth its value unless the Port is marketed to the world’s shipping lines. Without a doubt, a developed Colombo Port will threaten Singapore & Chennai Port and this is one key reason why indirect attempts prevail to delay Colombo Ports development. Ironically, Adani is building state of the art Ports in South India with aim to divert ships to India – so the question is – will India & Adani wish to develop Colombo Port simultaneously?

In the midst of all this it must also be remembered that the Colombo Port expansion proposal by SLPA in 2005 with development of ECT started in 2011 was set to be completed & operational in 2016. Over 430metres of the 1200metre long ECT terminal was completed via a loan obtained from ADB & BOC incurring $80m. By 2015 regime change, the Port’s financial situation was never highlighted. Then came yahaplana Ports Minister who cancelled an international order for equipment to ECT resulting in massive undisclosed penalty and completely wrecking the development progress of the ECT.

A historical victory took place in November 2019, President Gotabaya Rajapakse tabling his vision in Parliament on 3 January 2020 titled Saubhaghya Dakkma – The“Visions of Prosperity and Splendour” gave the assurance that “we will never allow other countries to take over our economically significant geographic regions or physical resources”.

The people naturally expects the Government to commit to this assurance.

A commercially viable Colombo Port should not fall into foreign hands for their geopolitical objectives.