Will US help create Tamil Eelam Homeland in Tamil Nadu & will India allow it?

India created Bangladesh out of East Pakistan. It took just 13 days. 73million Bangladeshi’s were given ‘independence’. So, the question is why didn’t India do the same to the Sikhs demanding ‘Khalistan’ or the Tamils demanding Tamil Eelam whether it was in Tamil Nadu or Sri Lanka’s North? Why is the West so pumped up to create ‘micro independent states’ that provide it strategic geopolitical advantage – Kosovo, South Sudan, East Timor are just some examples? What can we make out from Resolution 413 presented to US Congress by a handful of US Congressmen linked to LTTE Diaspora or the ridiculous Bills getting passed by LTTE lobbies in Canada? What do Tamils the world over read from these developments? The crux of the problem is that the same ethnic group (Tamils) are demanding a Homeland in 2 different countries using the same definitions to claim self-determination/separate state. How can this be allowed? To solve this, the question of where Tamils originally evolved needs to be answered and that leaves the homeland nowhere else but in Tamil Nadu.

What is a homeland?

A homeland is a person’s native land of origin. It is where their ethnic group evolved. Generally, every ethnic group has their own country –the Japanese have Japan, the Chinese have China, the French have France, the Germans have Germany etc. Pakistan was divided along ethnic lines and became a state for Muslims, while “India” did not become a Hindu state. Unfortunately, when India was created in 1947 combining princely states and autonomous areas of which Tamil Nadu was one, Tamils were not given their demand of a separate independent Tamil State. They only got a separate federal state. That grudge against the North Indians by South Indians remain to this day.

If we are in acceptance of the out of Africa theory, we are in unison that man evolved from Africa and spread out to all corners of the world and with time creating different groups of people who varied by their skin colour, features, geographical location, cultures, traditions etc. These groups later became codified as ‘ethnic’ groups by colonial rulers who went further to define them as ‘minorities’ ‘majority’. So if we are having problems with how people have been classified and categorized first blame the British!

There are Tamils living in all corners of the world. Most of these Tamils were plucked from South India and shipped off to the Caribbean, South Africa, Far East etc by the Colonials, in particular the Colonial British. During colonial rule in then Ceylon, the Portuguese, Dutch and British did the same by bringing scores of Tamils as indentured labor to Sri Lanka. There have been 18 invasions from South India and many would have decided to stay on in Sri Lanka too.

Now we come to the most important question.

Where did Tamils originate. Where did they evolve as an ethnic group? Is it in South India or Sri Lanka? If anyone claims Sri Lanka, they must also answer how there are over 70million Tamils in India while there are less than 3m Tamils in Sri Lanka.

So the most important question to be answered is where did Tamils evolve from, for that is where Tamils in the Caribbean can call their Homeland, where Tamils in South Africa can call their Homeland, where Tamils all around the world can call their homeland – where their original roots are. They may live in another country, they may hold citizenship in another country but where did their people originate? This is the golden question to answer. This is where Tamil Eelam has to be declared. This is why the self-determination quest started in India with several secession movements that were quelled by the Indian government until they found an escape by palming of India’s headache to Sri Lanka by arming Sri Lankan Tamils to claim a separate state called Tamil Eelam.

India created Bangladesh but India will not allow Khalistan for Sikhs and Tamil Eelam for Tamils in either Tamil Nadu or Sri Lanka. Mother Indira Gandhi created Bhindrawale & Prabakaran, Sikh bodyguards killed Indira and son Rajiv was killed by LTTE. 9m of the 30m Sikhs live in Punjab. The Punjab Accord signed by Rajiv in 1985 failed in 1987.  It is noteworthy how LTTE Diaspora in Canada have tapped some Canadian Sikhs to lobby for them and India should take note of this development and the foreign hands behind this!

It is clear that India does not wish to and will not allow a breakaway of South India’s Tamil Nadu losing 130,058 km² area to have it declared a separate independent & sovereign state of Tamils out of India’s Central Government control.

At least now Tamils should understand that India did all this not to help Tamils create any Tamil Eelam. India used Tamils for India’s geopolitical goals.India continues to use Tamils just as foreign intel are using LTTE Diaspora.

When foreign countries have banned LTTE, why are they not taking action against the pro-LTTE groups openly operating in their countries? Why did they use the previous government to deproscribe a select number of banned LTTE groups? These are all part of their larger plan to which LTTE Diaspora have no option but to take part in or have their shop closed & have their international money making network nullified in the process. So naturally, they are playing their role perfectly.

So India and Sri Lanka must take cognizance of the developments taking place building the foundation for 2 objectives – break up of India as that would be aligned to the quest to create micro states and it is a quicker way to their 2 main targets – China & Russia. The other objective if Eelam is created in Sri Lanka is to create another Israel in South Asia for West.

The break-up of India has been earmarked & openly declared in 1998 by US Congressmen Edolphus Towns. 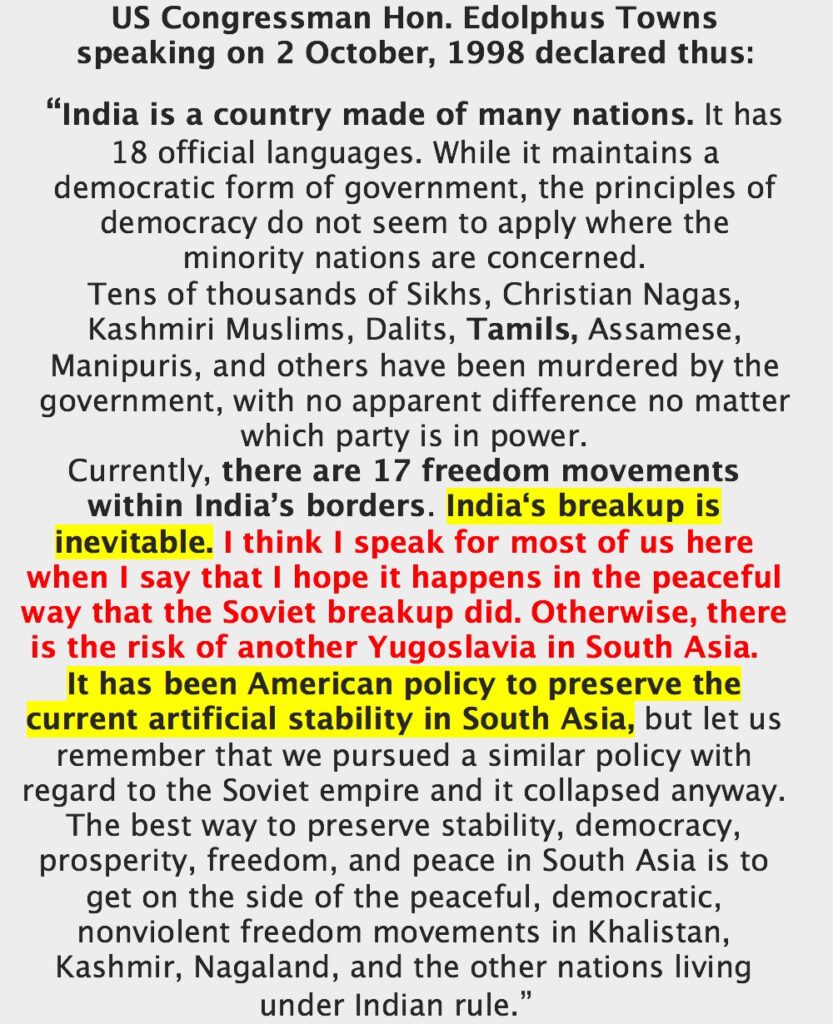 At least the Tamils in Sri Lanka should look at the situation beyond the hype and propaganda and realize that their home in Sri Lanka remains amongst the communities living in Sri Lanka sans any mono-ethno linguistic separate enclave and they must finally raise their voice to say they do not wish to separate Sri Lanka & desire to live in peace with all the communities of Sri Lanka. Let the LTTE Diaspora and anyone else wanting to create separate states carve these out in the countries that fund these campaigns!

Previous: Chagie picks holes in controversial US resolution
Next: Genocide of Children: Hide your head in shame Canada