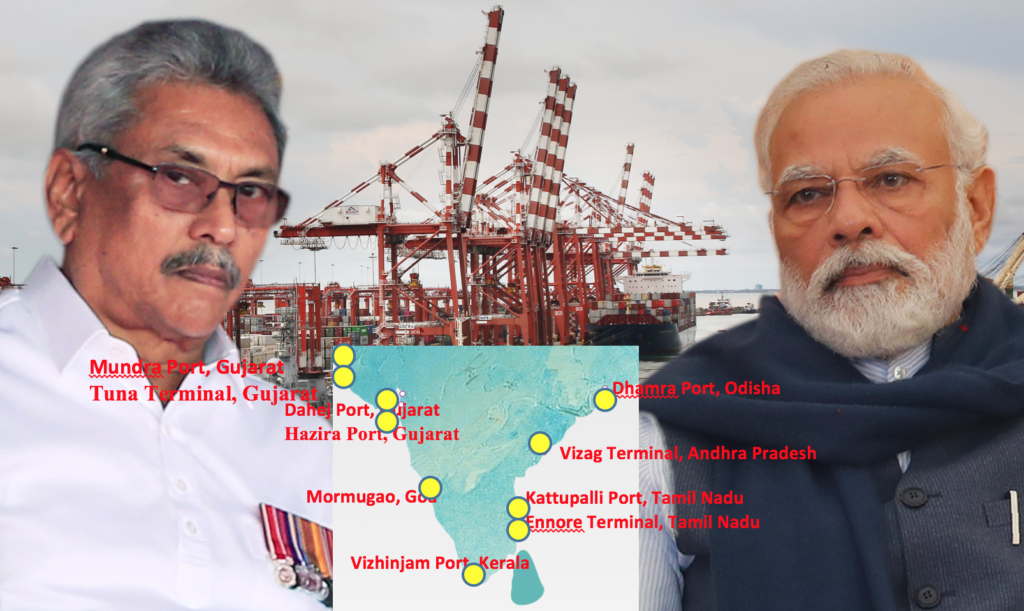 Being July, Sri Lankan’s have not too many fond memories of its relations with India. Having invaded Sri Lanka’s territory to drop dhal threatening to take military action if Sri Lanka were to stop India, Prabakaran was whisked off to Delhi & prevented from being captured by Sri Lankan troops. Prabakaran was kept in Delhi until JR Jayawardena then President of Sri Lanka signed the Indo-Lanka Peace Accord under emergency rule with even his own cabinet not aware of the contents of the said agreement. The Agreement itself is faulty and historically erroneous and went on to force constitutional change by introducing an unwanted 13a that divided Sri Lanka into 9 provinces and merged the north and east temporarily. All of the conditions that India promised to commit to, India did not follow-through and has failed to honor, virtually nullifying the agreement by the legal fact that conditions were not met.

Not stopping there, India went on to toy with Prabakaran even tapping his deputy Mahaththaya who ended up tortured to death for betraying Prabakaran. All the while India’s Centre was well aware of LTTE & other militants using Chennai (Madras) as its logistics hub and just like the West allowing LTTE fronts to operate from their shores, India did the same. These are no goodwill actions of a friendly nation towards a friend. Be that as it may, while helping LTTE militancy on the one hand, India was using the ‘our concern for Tamils’ with the other hand to exert tremendous pressure on Sri Lanka. The excuse given by Indira Gandhi for assisting militancy was her displeasure at JR Jayawardena’s affinity towards US when she was aligned to Russia but fast forward to present India is bosom pals with US and is partners of America’s pivot to Asia. India plotted regime change to oust Rajapakse as punishment for allowing submarines from China to enter Sri Lankan shores and now India is America’s partner not only signing defense pacts but now a partner of QUAD and engaged in joint training with US marines and India is virtually inviting its balkanization while putting entire region in jeopardy & chaos in time to come.

India has recently entered the news for secret meetings with TNA politicians. https://www.kubiyonews.com/local-news/ඉන්දීය-නියෝජ්%E2%80%8Dය-මහකොමසාර/?fbclid=IwAR0Gtac6pKIPAIljo6QHuSJelGJlQYl6yLnFkWIOV3iZYWvxG3_MptQjvdI

The media also reported that teams of Indian intel have landed to upset and change the election result. We now wonder whether the decision to start counting the votes the day after elections is part of this plot & question the locals tapped for this plot.

Then the startling disclosure at the Easter Sunday Commission with the news of Indian intel aware of jihadi attacks also forces us to wonder whether India is doing a LTTE with the jihadis. These are no small diplomatic bullying. These acts have caused hundreds and thousands of lives and Sri Lanka cannot even think of following an appeasing line with India thinking that giving what India demands is going to stop India from its bullying ways. It is only likely to increase with every giveaway that makes Sri Lanka ever vulnerable and weak. The giving in & allowing consulates in Jaffna, Kandy & Hambantota are today hotspots for various destabilizing networks taking place. The Trinco Oil Tank issue has led to Sri Lanka having to ask a foreign nation to use its own assets! We have been brought down to such low levels in our own country! Had the previous Govt given India monopoly over distribution of petrol we would have even faced a similar situation that Nepal faced when India blocked its borders preventing food medicine and petro reaching Nepal.

Imagine the Ports & Airports where the entry & exit points for Sri Lanka are under control of India!

It is in this context that we come to the subject of this discussion the demanding of Colombo East Terminal by India.

There is much that the previous government has to account for. Having come to power in 2015, the current East Terminal crisis unfolded as result of its poor choice of Minister & putting a closure to the development of the East Terminal being done since 2013 utilizing State funds by the SLPA. If the process had been allowed to continue a developed ECT would have been in operation by 2016. We are yet to even know the cost of cancelling the tender given to operate the cranes in 2015 and thankfully the Minister was changed in 2017 May but the damage of his tenure is said to have been Rs.4billion.

In August 2017 the then President declares ECT would not be privatized & would be run by SLPA going on to say that if ECT is privatized the SLPA would have to close down in 10 years. Yet, exactly 7 months later, the same President is holding discussions with the Prime Ministers of both India & Japan regarding developing ECT.

Confounding matters is that India’s nominee to develop Sri Lanka’s ECT is the very company not only developing Ports in India with intent to divert current Sri Lanka handled transshipment to India, but the very party now handling the Chahabar Port in Iran which India has been fidgeting with, without developing. Would the Indian company that is building India’s ports to divert Sri Lanka’s transshipment to India, wish to develop Sri Lanka’s port that would anyway have an edge over India’s ports however developed they are on account of Sri Lanka’s geopolitical positioning being viable for vessels in terms of logistics costs? https://www.adaniports.com/Ports-and-Terminals

Giving India to develop ECT is not only commercially a threat to Sri Lanka but there are major political implications too. We have enough of past experiences not to have to spell out these dangers.

Moreover, the MoC published on a media site claims India & Japan would ‘manage ECT’ for ‘long periods’– exactly how long is this? However beneficial for the country if the yen loan interest component is also to go on for ‘long periods’? Clause 5 speaks of a study – has this been done, by whom and where is the report? Clause 5 also speaks of a joint working group meeting – who sits on this and what are their conclusions?

What is clear is that the MoC does not carry or indicate any clear outright handover of control or operations to India or Japan. A MoC is NOT LEGALLY BINDING. It is only a means to outlinethe terms and details of the agreement before actual contract is signed. No contract was signed.

The strategic importance of Colombo Port

Lack of national policy should not sacrifice an islands’ most strategic asset – its ports & harbours. Every entry & exit point to an island is of strategic importance. Colombo Port is one of Sri Lanka’s most strategic locations in the Indian Ocean.

With over 30,000 vessels operating along the East-West shipping route the objective is to attract these ships to Colombo Port. Currently 23 major shipping lines and 7 feeder services operate out of Colombo. Colombo Port is one of the most economical ports in South Asia reputed for its fast turnaround time. EDI and other state of the art technology & control systems is improving its services. In 2019 JCT handled 7m TEUs. SAGT handled just 2m TEUs in 2018. ECT must remain under SLPA to maintain its container terminal business.

India has to face the hard truth that it is no goodwill partner. Sri Lanka can produce a list of partnerships that have been one-sided and based on threats and bullying. This is not a healthy partnership and one that Sri Lanka can continue given the stakes involved.

Sri Lanka must certainly have good relations with all countries at varying levels but Sri Lanka should not become ground for rivalries especially against a country (China) that has done no harm to Sri Lanka. Sri Lanka must also never forget the countries that have been with Sri Lanka without a trace of animosity. ‘Long standing goodwill’ does not apply to some nations whatever they claim on paper. We cannot forget the countries that have aided & abetted terrorism and terror in Sri Lanka. These countries can never espouse to be put on par with countries that have done no harm to Sri Lanka.  Diplomatic niceties cannot replace the damage they have done & no one can blame the Sri Lankan populace to be reminding an elected government of these past demeanors. All erroneous decisions are suffered not by politicians but the citizens!

The hidden objectives of AID, PROPOSALS, RECOMMENDATIONS were all ignored resulting in Sri Lanka’s sovereignty being tweaked & tampered. Agreements cannot compromise the national security & overall well-being of the citizens. No amount of international goodwill is of any value if the country’s wellbeing has to be sacrificed & compromised.