December strikes: 1,200 troops to cover for ambulances and Border Force

About 1,200 members of the military and 1,000 civil servants are to be drafted in to cover for striking ambulance and Border Force staff over Christmas.

Some 10,000 ambulance staff in England and Wales will strike on 21 and 28 December in a pay dispute.

Unions say military staff are not “sufficiently trained” to taking on ambulance roles.

However he declined to discuss “political debates”, stressing that the military is directed by the government to “serve the nation”.

The head of the armed forces has warned against viewing troops as “the go-to” option when it comes to covering strike action.

Speaking to the Sunday Telegraph, Chief of Defence Staff, Admiral Sir Tony Radakin, said: “We’re not spare capacity. We’re busy and we’re doing lots of things on behalf of the nation – we’ve got to focus on our primary role.”.

The Welsh government has said the military will not be asked to drive ambulances in Wales.

The co-ordinated walkout was called by the three main ambulance unions – Unison, GMB and Unite.

All three are taking action on 21 December. GMB union members will go on strike again on 28 December.

The strikes taking place in December
Hospitals told to free up beds for ambulance strike
Meanwhile, Royal College of Nursing (RCN) members are due to walk out for a second time on 20 December in parts of England, Wales and Northern Ireland, following action on 15 December.

The nursing union has said it will set a deadline of 48 hours after the strike ends for ministers to agree to discuss pay – otherwise more extensive action will be announced for the new year.

The government said pay rises for ambulance workers and nurses were decided by independent pay review bodies – which have recommended pay rises of around 4.75%.

With inflation running at more than 10% and many struggling with the rising cost of living, unions have said this represents an unaffordable real terms pay cut.

Cabinet minister Oliver Dowden said the government was determined to be “resolute”, reiterating that a 19% increase for nurses was “simply not affordable”.

Industrial action has also been taken by rail workers, Royal Mail staff and other sectors in recent weeks over pay disputes as the rising cost of living rises.

The government has announced it will publish a new “resilience framework” on Monday, aimed at improving how the UK prepares for and responds to critical issues like strikes.

The framework will “bring together all levels of government, critical national infrastructure operators, the private sector, charities and the public to bolster our national preparedness to these risks”, the Cabinet Office said.

When asked about the strikes, he does not criticise the government for calling in the armed forces, nor those who’re taking industrial action.

Admiral Sir Tony Radakin knows the armed forces must stay out of politics and he makes clear the military is there to serve the nation, whatever the task.

But his words do reflect some of the frustration within the armed forces at once again being called out to do someone else’s job. It’s by no means the first time.

They were heavily relied on during the Covid pandemic. In 2012 they had to provide security for the London Olympics.

When asked about the strike action, the head of the armed forces reminds the public that’s not their primary role – it’s to defend the nation.

Being pulled away to fulfil other roles can often have an impact on training, although it will not affect military operations.

Admiral Radakin’s comments do reflect frustration, rather than anger over what they’re being asked to do. He also knows that when the armed forces help out most people are grateful.

2px presentational grey line
The ambulance strikes will affect non-life threatening calls only. Hospitals have been warned by NHS bosses to prepare for “extensive disruption” during the walkouts, and to free up beds to make it easier to move people through A&E and get paramedics quickly back on the road.

However, doctors’ leaders warned this would be very difficult to achieve.

The government said the health service will put into place “tried and tested” plans to reduced risks to patient safety and disruption, while individual NHS trusts will work with unions to agree on a safe level of cover.

But chief executive of the NHS Confederation Matthew Taylor said there was “no question” strikes would pose risks to patients.

“We’re in the middle of winter and we have a health service which, even on an ordinary day without industrial action, is finding it difficult to cope,” he said. “So there are going to be risks to patients. There’s no question about that.”

Sara Gorton, head of health at Unison, said during a strike day there was “unfortunately more risk” to patients, but she said “every single day patients are being put at risk because of the staffing crisis”.

Unison says there are 133,000 vacancies across the health service.

Troops from the Army, Navy and RAF will be deployed. Some 600 members of the armed forces are due to take on ambulance driving roles and 150 personnel will provide logistical support.

Mr Barclay described the decision to go ahead with strikes as “deeply regrettable”, repeating the government’s position that the striking unions’ demands are “not affordable” – but he also said that he was “open to further discussions”.

“My number one priority is to keep patients as safe as possible and we are stepping up preparations across government and the NHS, including making best use of the armed forces, volunteers and freeing up capacity to mitigate disruption and ensure safe staffing levels,” he added.

Unite accused ministers of “hollowing out” the health service, describing those taking strike action as “trying to save” the NHS.

GMB and Unison blamed ministers for opting to “dig in their heels” on pay while the NHS is “already on its knees”, adding that disruption now appears “inevitable”.

Sara Gorton, Unison’s head of health, also warned the military is “no substitute” for trained ambulance staff, adding: “The hours spent on contingency planning could have been better used trying to prevent the strikes from taking place.”

Meanwhile, the main union representing Border Force staff is set to walk out for eight days between 23 and 31 December, with significant disruption for people travelling over Christmas expected.

Ticket sales halted
About 1,000 Border Force staff who work in passport control will walk out on 23-26 and 28-31 December at Birmingham, Cardiff, Glasgow, Gatwick, Heathrow and Manchester airports as well as at the Port of Newhaven.

About 75% of Border Force staff are members of the Public and Commercial Services union, which balloted for strike action after it said the government had refused to increase a 2% pay rise offer.

As a result, some airlines have stopped selling new tickets for inbound flights to Heathrow on the days Border Force staff strike over Christmas, the BBC understands.

The Home Office has previously said it was “extremely disappointed” with the PCS union’s decision, warning it would cause a “significant inconvenience” to travellers over Christmas and “passengers should be prepared for disruption and take action to plan ahead”.

The PCS has accused Home Secretary Suella Braverman of “scrambling around” to get “anyone she can” to cover for border staff, as well as echoing the ambulance unions’ concern that military staff and other civil servants are not “sufficiently trained”. 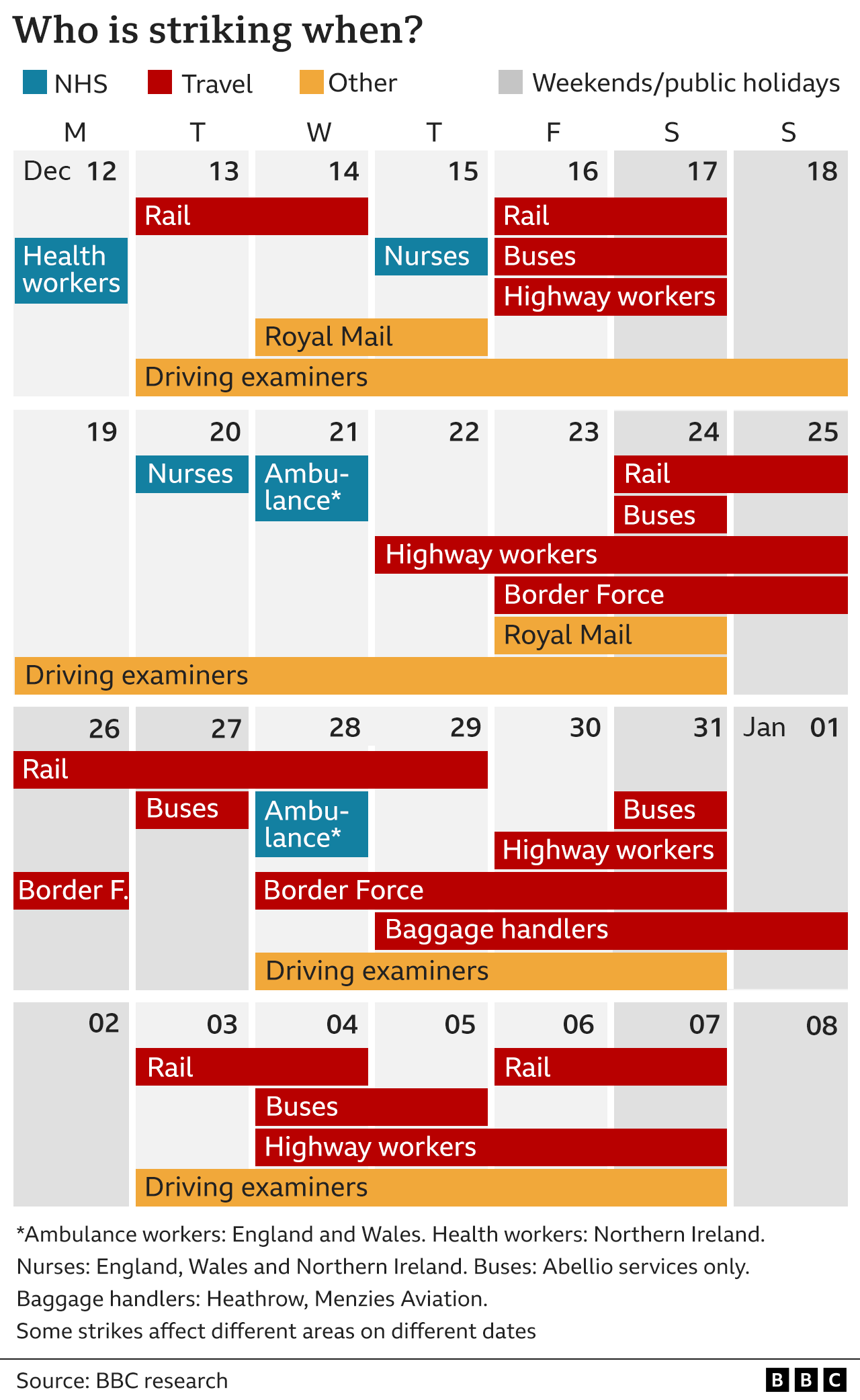